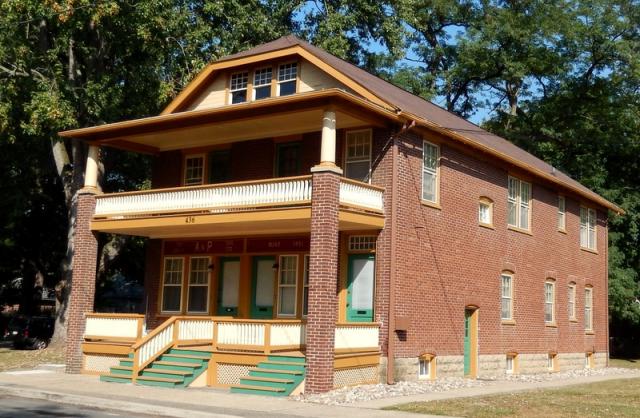 Located in the Vallamont subdivision of Williamsport, the building at 436 Glenwood Avenue was built in 1921 by the Vallamont Building & Planing Mill Co., J.C. Winter President (see VALLAMONT MILL APARTMENTS & J.C. WINTER HOUSE for more history).  It was originally constructed as a neighborhood grocery store and the residence of the store owner.  The ownership of the store transferred to The Great A & P Tea Co. in 1925 and they maintained a store in this location for three years. Thereafter, further changes in store ownership occurred and eventually a Grand Union Store operated here from 1932 through 1937.

The modern garden-style apartment building at 432 Glenwood Avenue sits on the site of a large trolley car barn built by the Vallamont Traction Company in the 1890’s and destroyed in a massive fire in 1923.  The apartments are air conditioned and include fully equipped kitchens with dishwashers.  An adjacent parking lot serves the two bedroom apartments in this building.  A coin operated laundry in this building serves both buildings.  Heat, water, and sewer service is included in the rent for both buildings.