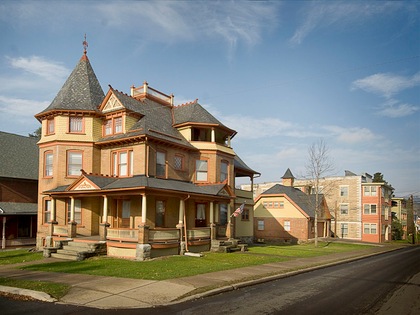 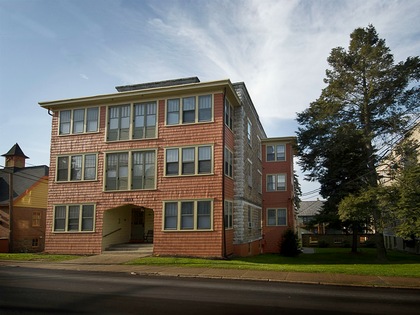 The Vallamont Mill Apartments & J.C. Winter House complex is located in the Vallamont neighborhood of Williamsport, a predominately residential subdivision laid out in 1889.

This group of four historic buildings offers twenty one apartments with a mix of one bedroom, two bedroom and three bedroom apartments. Charming and spacious, the apartments also offer abundant closet and storage space. Most apartments have an intercom system, allowing residents the ability to talk to their visitors and then unlock the building’s entrance door from their apartment. Several apartments have a washer & dryer provided and a coin operated laundry is available for the use of all apartments.

John C. Winter (1868-1950) started his own contracting business in 1891. Shortly thereafter he established his first planing mill, with adjacent lumber yards, at the former site of the “Old Fair Grounds” on Market Street in Vallamont. J.C. Winter informally studied architecture and over the coming decades would design and build hundreds of buildings. His mills provided construction and decorative lumber for his own projects as well as many buildings built by others. 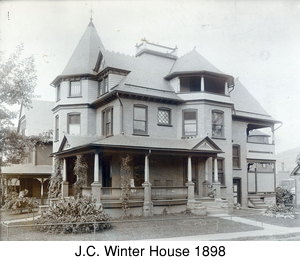 In 1898 J.C. Winter, “Architect & Builder” completed the construction of a stately three story Queen Anne style Victorian house at 1001 Market Street. Adjacent to his mill, this residence and neighboring carriage house would house the Winter family until 1956. At times, household servants and a pet alligator were also residents. J.C. Winter is believed to have owned the first refrigerator in Williamsport and also was one of the first residents to own a car (licensed in 1905). After several decades of neglect and deterioration, the J.C. Winter House was purchased by Penn Real Estate in 2009 and has since been restored to its original grandeur. 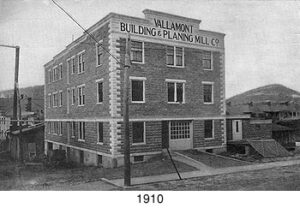 By 1902 J.C. Winter was operating under the name of Vallamont Building & Planing Mill Co. and, in 1910, he replaced an earlier mill building with the three story rusticated block building that still stands at 1015 Market Street. Shortly thereafter, a second three story building (c.1912) was erected at 1019 Market Street in order to accommodate the growing business. By 1927, after the Vallamont Building & Planing Mill Co. had relocated elsewhere in Williamsport, the company converted both of these mill buildings to apartments with sun porches and balconies added to the fronts. In recent years the mill buildings and their apartments have been meticulously preserved and restored to the original appearance of the 1920’s.

J.C. Winter, and the Vallamont Building & Planing Mill Co., designed and built over 500 homes, several churches, a railroad station, factory buildings and schools (see VALLAMONT SCHOOL APARTMENTS) throughout Williamsport and surrounding areas. Although not college educated J.C. Winter was awarded an honorary degree in architecture from the Pennsylvania State University.

Paved off street parking is provided on site and is complemented by abundant on street parking. Several garages are also available to rent.

The Vallamont Mill Apartments & J.C. Winter House are convenient to all city amenities, on the bus line and within short walking distance to Brandon Park and downtown.